After the excitement of my first track day, I was raring to go and grinning with anticipation. I was sat in front of a computer screen scrolling through track days for what seemed like hours before we settled on booking our next event at the famous Cadwell Park near Louth. I had heard many stories and seen many pictures of the mountain so I was looking forward to riding the track and in particular having a go at the famous mountain jump section on my little Suzuki GXSR 600. 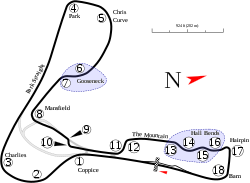 So here goes, Kyle bought a Suzuki GSXR600 very similar to my own bike, Big Ste was on a GSXR 1000 k5 track bike, Charlie was on a Suzuki GSXR 750
and we were all in the intermediate group. Last time out Ste was in the fast group and we were in the slow group so the race is on.

We went down to the pit lane entrance and waited to go out for two laps behind the instructor. Off we went straight out behind the instructor for the mandatory two laps and this time I felt very comfortable speed wise although one thing I did notice was the bikes seemed a lot less road like and a lot more track like in the intermediate group. Gone were the headlights sparkles and highly distinguishable road Yamahas, Hondas and Triumph 675 Daytona’s and in were the poorly painted, crash damaged but highly tuned fire-breathing monsters.

I could go much faster

After the two laps, we came into the pits and went straight back out minus the instructor. We were off, Big Ste in front followed by Charlie then me followed by Kyle. We did a couple of laps to warm the tyres without major change. I was feeling very confident I could go much faster. I felt I was riding at around 60 or 70 % effort. So when Kyle overtook me this was my green light to test my throttle. Cables were attached to the carburettor as it happened it was and I got a good drive out of the fast right-hander. On to the back straight and overtook him with ease, Charlie was next coming into the gooseneck a couple of corners later.

Then I was behind big Ste on his track GSXR 1000 and this was a little trickier because he was quite evenly matched to me. I could pull him in through the corners and pull five or six bike lengths on the brakes but then he gained a big advantage down the straights. This was my first proper race, a battle and I liked it. I did overtake him in the end on the same corner that I got Kyle and pulled away a little before the chequered flag appeared to signal the end of the session.

We all arrived in the pits at similar times. To many different versions of the same sorry excuses and accusations were rife. You cut my nose off you cut me up. I was leaking oil I had mud on my tyre etc etc etc. The problems I find with excuses are that only the people who lose use them. If you lost because you had a genuine excuse you know you can do much better. You do much better next time outlet your skill do the talking. Next time out I went out last and overtook them all over again. But this time the battle was behind me. Kyle overtook Charlie like he was going backwards. I think he was lost because he needed a sat nav to find second gear.

The best race of the day

Then we had what should have been the best race of the day Ste versus Kyle. They were closely matched and out together, race on Ste. In front Kyle behind for a couple of laps then they come over the mountain very close together. Then with the entrance to barn up ahead, Kyle saw an opportunity and went for the inside line. Unfortunately, like Charlie’s sat nav his ability and confidence were incorrectly aligned. Kyle was doing a spot of gardening.

Gixer down, there was GSXR shaped bunker in the grass and a hobbling Kyle. The biggest injury of the day was nearly Ste who nearly cracked a rib laughing. Kyle’s bike came back as an unrecognisable box of bits and his day was prematurely ended. Charlie came away from a thoroughly enjoyable day uninjured (apart from his ego) and bike intact. Ste was over the moon beating Kyle and destroying Charlie. However, I wasn’t seeing the limits of my 32000-mile GSXR 600. I decided that that would be its last outing. I still wanted to learn how to ride so I will be purchasing another 600cc bike. My next blog will be about my new bike the awesome Yamaha R6 r 2007 model.